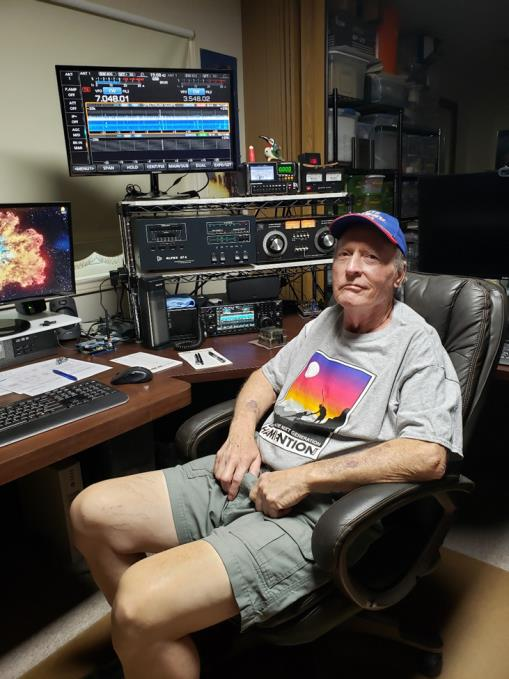 My ham career started in 1977 when a friend said he wanted to become licensed. We decided to work together to become hams.

First, we found a Novice class and began attending. Soon we passed the code test and were tested for Novice. The license came in 90 days. Meanwhile we went to Madison Electronics in Houston and both bought a Yaesu FT-101E. We worked CW only for about a month until speed was at about 15. Then studied for General and took the test at the Houston FCC office. We both passed. That license was granted another 90 days later. By that time, we took the Advanced test and passed. Another 90 days for the new license. Our speed was up to about 25, so we were ready to take the Extra test. However, a tornado took out my antenna, and my two daughters needed help with school, so I went inactive.

It was 1994 when I became active again. I put up a 150-foot tower and operated mostly phone, mainly used in contesting. Soon I studied up and got the Extra ticket. This led to involvement with a local club, Northwest Amateur Radio Society. I have served as treasurer, VP and president. I took over the VE liaison position and ran the test sessions for 10 years. I have partnered up with Skip Ferguson K5LLR, a retired professor, to offer ham classes.

In 2010 I got interested in the Texas QSO Party. Chuck Sanders NO5W talked me into becoming coordinator. I still have that job today.

In 2015 I received an invitation from Kenneth Ransom N5VHO, ISS Ham Project Coordinator, to become the trainer for NASA astronauts. I talked Skip into joining me, and we are now the official NASA ham trainers. So far, we have trained five astronauts. The first two were Serena Aunon-Chancellor and Nick Hague. Both have been in space and have returned. (Editor’s note: Read a feature story about this unique experience, later this year in Solid Copy.)

I also have an interest in DXpeditions, and have been to Falkland Islands, Malta, San Andres, and Nicaragua (three times). Falkland Islands was in 2004, and I have permanent license VP8DXL. During this time, I met Cal White WF5W, who recruited me into the Texas DX Society, sponsor of the DXpedition. I learned a lot from Cal, now a silent key. After Cal passed, I began to organize my own DXpeditions. The last time, in Nicaragua, my team won the 2017 CQ WPX SSB Contest Expedition World Winner plaque (station YN2KW). My call was YN2MG, and I made more than 1800 CW contacts in the non-contest days.

Today I am mostly retired from everything. I still run the TQP and serve as a VE. I attend Dayton, Ham-Com and Austin Summerfest every year.

My training includes degree from Houston Baptist in physics, physical chemistry and math, graduated in 1968. Prior to that, I served in the USAF (1960-1964) as a weapons control system mechanic (radar technician) on the Convair F-106 interceptor. I was recruited to work on the Shuttle hull design at NASA but declined because it would have led to four more years post-graduate studies at Rice University.