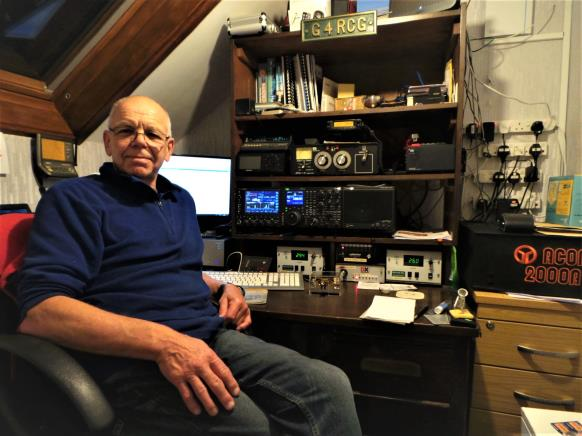 Thanks to all my sponsors for making it possible to join CWops. I am looking forward to meeting you all on the air.

My interest in radio started when I was a very young teenager when we had pirate radios stations in the UK who used ships off the coast of the UK (they operated outside the 3 mile limit so they were in international waters and couldn’t be prosecuted) My brother who worked in the Merchant Navy brought me a transistor radio when he was on one of his working trips to some exotic place and I can still remember vividly going to bed and getting the radio out and under the bed covers listening to these Pirate Pop Radio stations for many hours until I fell asleep.

I was first licenced in 1982 after a short spell on CB which didn’t do anything for me, I passed both parts of the “RAE” at the first try and got my “B” class license with the call G6LCP (my wife Trish now has this call). This was just a VHF/UHF license and in those days, you had to pass a 12 wpm Morse test to get your “A” class license which gave you HF access, so I went all out to learn CW. It took me all of 6 weeks after which had to go for a Morse Code Test at a GPO Coastal Station; I passed first go and got the call G4RCG and never looked back. In June 2010 I applied and received my contest call M2G which I use in all the major contests that I take part in.

My Interest in radio is just HF and LF, I don’t bother much with VHF/UHF and all CW or RTTY and PSK63 (I only use Data in contests). I have absolutely nil interest in FT8! I have a good antenna farm with 2 towers and antennas for 160-6m; if you would like to see them go to my QRZ.COM page and have a look at the Drone Video I have of the QTH and antennas. My radio is a Kenwood TS990S which I have had for 5 years now, great contest radio. I have an Acom 2000a as the main amp with an Acom 1000 as a backup.

I have been retired now for 5 years, I was the Managing Director of a Security Business which specialised in wireless Intruder alarm and CCTV, we sold out to a big player in the security game and never looked back, I love retirement as it gives me the time when I want, to get on the radio to take part in my first passion which is CW!!