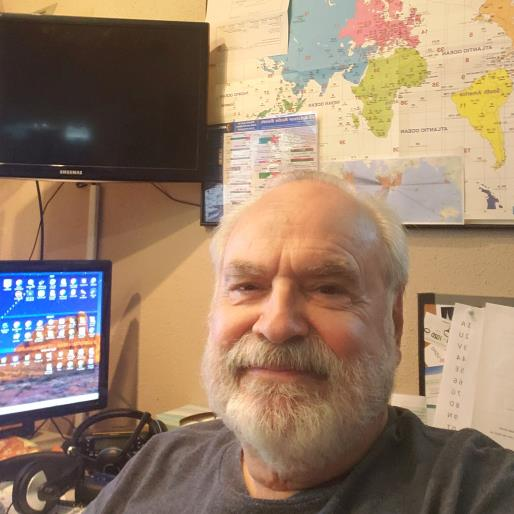 I am honored to become a member of CWops. Many thanks to Serge, KK7RR for his nomination, and thanks to each of my sponsors. I took the Basic class with Mac, NN4K, the Intermediate class with Marc, K5GQ, and the Advanced class with Serge, KK7RR. Each advisor has their own unique style of helping students to absorb CW. I needed the structure and goals. Practicing on my own would have been fruitless.

I was first licensed as a novice KN6MVI in 1955 and upgraded to Conditional K6MVI soon after that. After high school I joined the Air Force and went to Alaska as KL7DED. Propagation was great, and I enjoyed some CW, but mostly AM.

After Alaska, the Air Force sent me to Texas where I met my wife of 60 years. After taking the Advanced test with the FCC, my new call was WA5QOC. I worked for the FAA as an Air Traffic Controller and later moved to the automation staff. After leaving the FAA on early retirement we moved to Maryland working for IBM. During a trip home to Texas, I took the Extra test at a ham convention. My new call was AA3IE and was not great for CW. I was transferred back to Texas shortly after that and received my current call, AB5XS. Not the best call for contesting, but I like it.

Twenty years passed without being on the air. All my equipment was given away. After retirement, a grandson spurred my interest again. So in 2016 I bought an ICOM 7300 and a trap vertical. But how things had changed! No AMTOR, RTTY, or PACKET QSOs. My CW was awful, and not caring much for voice modes, it was PSK, JT65 and other digital modes for me. FT8 is easy DX but it is very limited. I have had a few satellite contacts. A local club member, K0VD, introduced me to CWops Academy, and after six months, my CW skill grew far beyond what it was.

I will always be grateful to CWops and the advisors who freely give of their personal time. I plan to continue to build on my CW training. I want to learn SO2R for contesting and do some CW DX hunting. I am also looking forward to continuing weekly CWT contests and even making QTX contacts after more CW polishing.