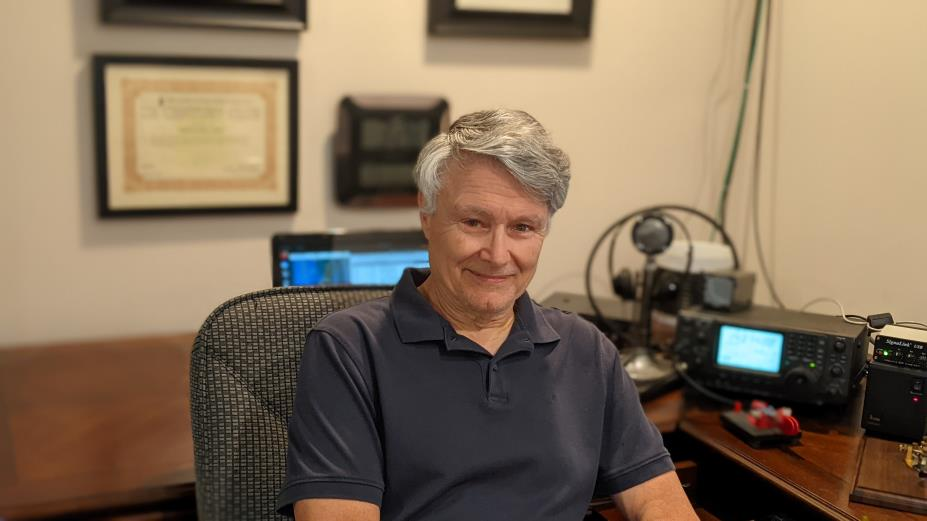 First I would like to thank Dennis WA2USA for my nomination and Mike K5UV, Hank W6SX and Frank K1EBY for their sponsorship. It is greatly appreciated!

My interest in radio began with a Philmore receiver kit my dad built for me when I was about 8 years old. But interest really began to peak in 1965 when I was 13 and saved up my paper route money to buy a channel 11 CB walkie-talkie. These were popular radios back then and some of my friends had them so it was a good way to keep in touch. It was not long before I discovered all the other signals with CB call signs, not to mention the squealing heterodynes when the skip was active. A neighbor explained what was going on and showed me his ‘ham’ radio station. I was hooked.

Dad got me a Lafayette HA-226 general coverage receiver which was not too useful as a ham radio receiver but it had a BFO and I could practice copying code until I was ready to take my Novice test. I got my Novice license in 1967 as WN9TBW. My first station was made up of WW2 surplus Command Set radios. These were plentiful and cheap in the 60’s. I converted the BC-455 6-9 MHz receiver and interfaced it with a BC-453 190-550 kHz receiver as a second IF which made a surprisingly sensitive and selective 40 meter receiver. For the transmitter I converted a BC-459A as a 75 watt amplifier and fed it with an Ameco AC-1T crystal transmitter. I was stuck on 40 meters but made loads of QSOs. I got my General ticket in 1968 as WA9TBW and repurposed the BC-459A as a VFO to feed an Eico 720 transmitter. The Command Set receivers were replaced with a Heathkit HR-10B. I got my Extra Class ticket in 1970.

I graduated from college with an Electrical Engineering degree in 1974 and went on to work as a controls engineer for industrial automated assembly and test systems. During that time my HF station consisted of a Drake TR-4Cw. While I operated some SSB I always came back to CW as my favorite mode. That old HA-226 with its lack of selectivity, instability and noise prepared me well for tackling solid copies through the QRM and QRN! As time went on, family activities and raising two girls along with work as a manufacturing engineer kept me mostly off the air but I maintained my license and in 2006 changed my call to AA9WJ. In 2008 I became fully active again with an ICOM IC-746pro and added the digital modes to my operating experience.

I retired in 2018 after 44 years of work and stay active with biking, hiking and traveling with XYL and look forward to returning to lap swimming and weight lifting when the pandemic eases up. I use a backpack with an Elecraft KX-2 for POTA and SOTA. I also enjoy SKCC with my old EF Johnson model 590 J38 key and of course CWops!