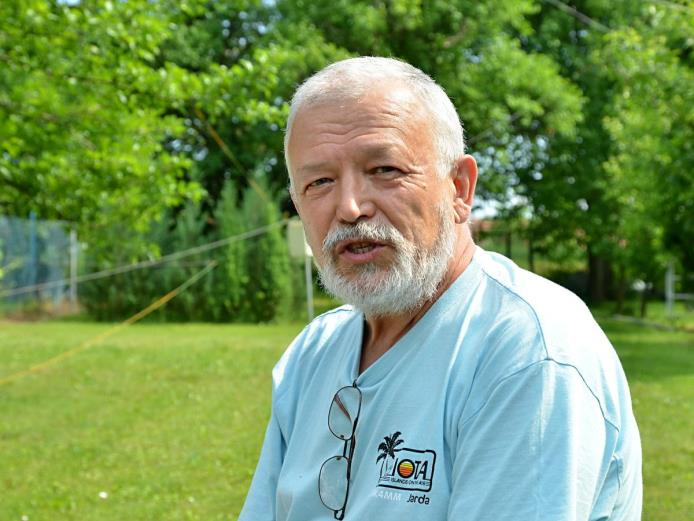 Jarda, OK4MM lives in a small town in southern Moravia, the eastern part of Czechia – or Czech Republic. However, ten years ago, he moved his radio equipment to a rural cottage, far from civilisation. The electromagnetic noise generated today by households is a nuisance even in small towns.

Here he has three of his favourite things – radio, dog and the vineyard.

Jarda is now over 70 years old, or should I say young. He received his first licence 50 years ago, a couple of months before the Soviet invasion on Czechoslovakia in 1968.

To get the permit, he had to wait 5 years participating in club activities. His first call sign was OK2PBM.

A view from the radio room on the upper floor of Jarda’s countryside cottage shows grapevine plants, and some fruit trees, live here in harmony with radio antennas. The telescopic aluminium tower is next to the house, with also a low-band vertical. This is a flat area at about 300 m a.s.l. (1000 ft), but Czechia is mostly a mountainous country.

Inside the radio room there are no piles of expensive equipment. He is a competent DXer through knowledge and patience. Jarda spent 5 years at sea working as a ship radio officer. In the 1980s many radio amateurs from Czechoslovakia, which has no access to any sea, were recruited to work as Sparks aboard large vessels. He visited many DX places and was frequently on the air as OK4PBM/MM. At that time there were 3 call districts in OK land, the figure 4 was used by maritime stations. When it became allowed, he changed his home call sign to OK4MM.

Relatively simple antennas, usually low power, sometimes even QRP, but the results are spectacular. Being on the DXCC Honor Roll and having 161 DXCC entities confirmed on 1.8 MHz using this relatively simple setup is an achievement. Jarda has also visited almost 70 DXCC entities and was on the air from about two-thirds of them. In the past 20 years or so he has activated many islands.