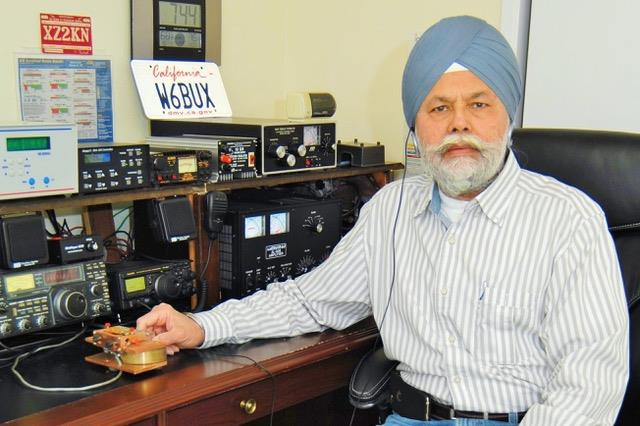 My parents lived in Rangoon, now known as Yangon, the capital of Burma, now known as Myanmar and my father had the largest machine shop and foundry. He got his Amateur Radio license in 1938 with the call XZ2KN.

When WW2 was in full swing and war was going on, my parents did not feel safe under the Japanese occupation and had to trek out overland to India. They usually travelled at night so as to not arouse suspicion and the journey of about 300 miles from Central Burma took over three months. I was born in August 1943 in Punjab, which is a province in Northern India.

My parents and I returned to Burma in 1946. I used to see my father in his radio room with headphones on and tinkering with old WW2 equipment which had been left behind by the Allies. I went to Catholic schools for my education as they were the best I was told, and normally you had to be Catholic to attend but my father had arranged timely donations to keep me there. The Christian Brothers were very strict, and I got a very good education for which I am grateful.

Watching a Western movie with my father one day at a movie hall, I heard a sound like what used to come out of my father’s radio room and he said the Station Master sent a message about the landslide on the railroad tracks. When I asked how he knew, he said it was Morse code and if I learned it, I could get a license like him. After school next day, he started teaching me the sounds by using an old bicycle horn and a straight key. To muffle the sound, he put the horn under a cushion.

I learned radio theory and was told that I would have to show that I could build a one tube receiver and how it worked. Helping my dad and reading old ARRL handbooks he had saved, I absorbed all the knowledge and studied schematics and built a one tube receiver. When my father felt I was ready to take the test, I was taken to the Office of the Telecommunications Department for the moment of truth. Two other radio hams went with my father as witnesses and I passed the code test of sending and receiving at 13 wpm with no problem. The one tube receiver was just a formality as they knew my father well.

Burma would give out an Amateur Radio license and a Station license with call letters. Since my father already had a station license for XZ2KN, I was allowed to operate as a second operator. I got my license in 1955 and I was 12 years old. New hams were restricted to CW operation for one year and then Phone was allowed. Transmissions were in AM requiring a transmitter and a speech amplifier to modulate. Band conditions were very good, and we worked around the world as we were sought after by most hams and we were the pileup as Burma was a rare country. Of the 22 licensed hams, only thr

The troops had dumped all the radio equipment when they left and it was there for anyone to take. The locals did not know the value of the stuff and used it for listening to shortwave broadcasts. My father knew the value of the equipment and brought it home. We had RCA ET4336 transmitters, RCA AR88 14 tube receivers, Hallicrafters and Collins 75A4 receivers. Among the bunch was a few BC221 frequency meters in pristine condition.

Since our station was one that was on the air most, visiting hams would almost always stop by our house to see our station and home brew antennas. There were no ham radio stores and we built our antennas in the machine shop and used parts from other WW2 radios to keep our equipment going. The oil filled capacitors leaked and it was my job to replace them.

Some of the notable hams that came to our station were Wayne Green, Senator Barry Goldwater and King Hussein of Jordan. Father Moran also stopped by on his travels. These are just a few that come to mind. Wayne Green put a picture of my father on the September 1969 issue of 73 magazine.

Burma was a democratic country with a Parliamentary Government and in March of 1962, an army general staged a coup and arrested all the politicians. He was influenced by the Chinese and was a Communist at heart. He was brutal and did not tolerate any resistance. He started the Burmese Socialist Party and changed the government into the Burmese Way to Socialism making a slight distinction that he was not Communist. Burma is a Buddhist country and are very devout religious people which is anathema to Communism. We knew it would not be long before Amateur Radio would be banned. Ham radio was finally taken off the air in early 1968 and even today there is no provision for getting a license. A few exceptions have been made for short temporary activations by visitors. With living conditions deteriorating every day, I decided to leave and immigrate to the US. I had a sponsor in Illinois who was a family friend and had lived in Burma for many years. He was working with the US Embassy in Rangoon. He sent all the required documents by snail mail (no computers or internet) as was asked, but the embassy makes it almost impossible to get an immigrant visa. This meant making numerous trips to the embassy and I found out later that it aroused the suspicions of the Secret Intelligence who were embedded in every neighborhood. I finally qualified and got my visa and booked a flight to leave the following week. The next week in June of 1972, I was taken from my house and my family did not know where I was or taken to.

I was kept in solitary confinement in an eight foot by eight-foot cell with no view of the outside and no contact with anyone. I did not have any reading materials and was allowed to take a quick wash every few days with a garden hose out of the cell with two armed soldiers looking on. When asked why I was there, I was told I was not guilty of anything but in ‘Protective Custody’. One clay pot was for drinking water which I filled myself and the other was my toilet I had to dump in a pit latrine.

I spent seventeen and a half months in that dungeon and was finally allowed to leave the country. I arrived in Springfield, Illinois in March of 1974 and after a few months got my first call WB9TTN. I could not wait for the day to become an American Citizen and five years later, I was sworn in as a US Citizen. Among my witnesses at the ceremony was Jim Churchill K9HDZ now a silent key and John Swartz WA9AQN who is also a CW operator and we have a QSO almost daily on 20m CW. I am living the American dream and live a very comfortable life with my wife and two kids in Southern California.

My present call of W6BUX reflects part of my first name. I enjoy CW and my station consists of an FT3000, FT897D, TMV71A, Ameritron AL 80 amplifier and numerous other equipment. The HF antenna is a 4 element DB36 SteppIR antenna at 75 feet for 6m through 80m and a Comet CX333 vertical on top for 2m, 220 and 440. A five element Yagi for 2m and 440 is also there on top and my home brew 11 element 2m cubical quad completes the antenna farm. I love CW and one can find me lurking in the CW portions of any band that is open at that time. Would love to have a QSO with you. I am very happy to be part of CW ops.