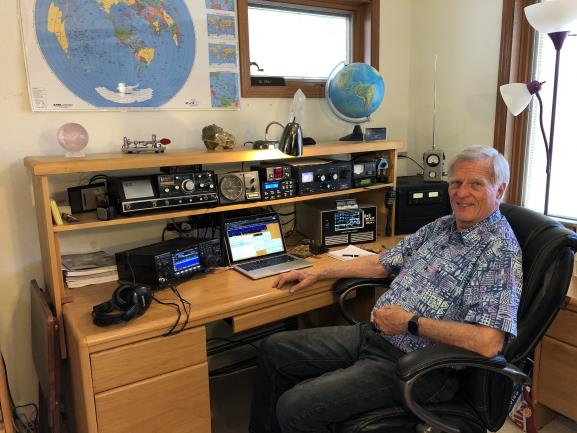 First, I am in gratitude to Bill Leahy, K0MP, for his support and guidance in my intermediate CWA class, also, for nominating me to join CWops. What an honor. Also, thank you to those of you sponsoring me.

I grew up in southern California, with an active interest in electronics. I built my first crystal set at age 12. I got interested in Ham Radio soon after that. My novice class ham ticket came in September of 1958, at age 15. My first rig was a kit, running 6SN7 twin triode, super regenerative receiver, and a 6L6, 25-Watt transmitter. When I upgraded to General class, I built a modulator for my CW rig and went on AM with about 20 watts, crystal controlled. Later on, when I could afford it, I purchased a used Hallicrafters HT-37 SSB transmitter, and a Drake 2B receiver, with QF-1.

In 1961 I began working for the Pacific Telephone and Telegraph Company, while still a senior in High school. I continued working while going to college and starting a family. After graduating from college, I was promoted to engineering and spent most of my career in Telephone Company technical training and engineering. In 1984 I was asked to go to Morristown, New Jersey, to work for Bell Communications Research (formally Bell Labs). This was to provide technical support to the Bell Operating Companies. Following divestiture from AT&T. While there, I got the DX bug. I worked over 300 countries and learned to love communicating with other hams all over the world. I recognized the importance of CW in DX chasing. One of the most fun projects at the Labs was engineering an HF Radio System for the Bell Operating Companies. The purpose was for use restoring the National telephone network, in event of catastrophic failure.

At the end of 1987 I was offered an opportunity to take early retirement. With much thought, I took it and moved back to California. I then began exploring spirituality and metaphysics. This led to a new career as owner of a wholesale business providing products, such as, semi-precious stone jewelry, crystals and stone specimens to stores around the country. In 2000, my wife Danna Loori (K2JOY) and I, moved to a small farm in the middle Rio Grande Valley, south of Albuquerque, NM. We worked together at our business, “Happy Heart Enterprises LLC,” until 2018, when our son and daughter-in-law took it over.

We love to travel. We spend several months a year traveling in a 40’ class “A”, Alfa Gold RV. We tow a 21′ car hauler trailer. In the RV, I run a Kenwood TS-480HX at 200W. Fortunately for me, Danna loves to drive the RV. (She used to be an Orange County, CA, Transit Bus driver). I use an SG-230 auto tuner mounted on the rear roof of the RV and feed various antennas, depending on if we are in motion or not. While in motion, I use a 22′ trailing wire antenna from the top of the ladder to a pole on the rear corner of the car hauler trailer. I have worked a lot of DX rolling down the road.

Speaking of travel, I have operated vacation style from The Grand Bahama Island as C6AEE, Grand Cayman Island as ZF2AE, and numerous times /KH6. Last fall we travelled to VK land and met many of the hams I had previously met on the radio. This was a real treat.

Other interests include: 5-string banjo, folk guitar, experimenting with different ham radio antennas, and solar power. To this end, we installed a 7.4 KW solar power plant on our barn.

I appreciate the effort CWops is doing to stimulate growth in CW activity.