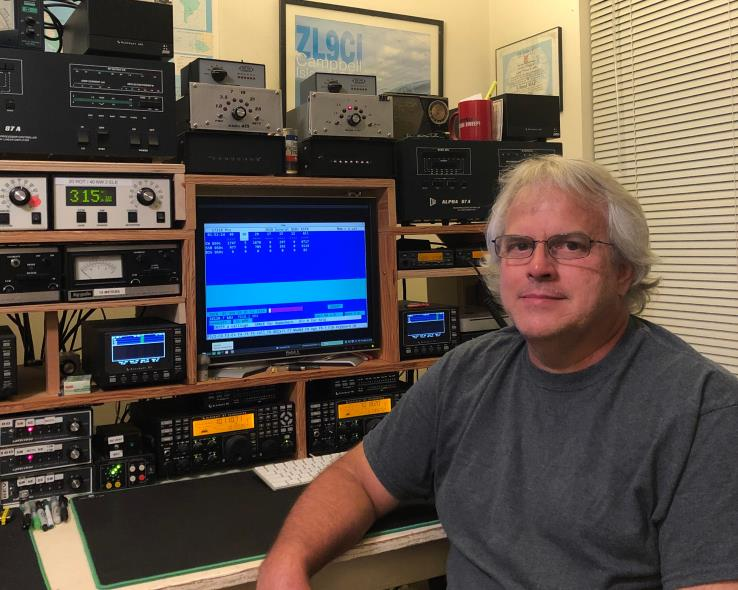 I fell in love with radio in about 1975 at the age of 12. The CB radio boom was in full swing and the father of a friend that lived across the street had a CB radio in his truck and we spent a lot of time out there listening to the activity. It was pretty much all I talked and dreamed about. I kept bugging my father to let me get a CB radio and he did get me some Radio Shack walkie talkies that had three channels in them so we could be on more than just channel 14. He also hooked up his Hallicrafters S40 that he had had since high school. He never got his ham radio license when he was young for a number of reasons. But he did know that if I wanted to do a radio hobby, ham radio was much, much better than CB radio. He pointed me towards a ham radio class and we both ended up getting licensed. He has never made very many contacts, but he has helped me along in this hobby. He got WB5UKU and my first call was WB5VZL. We started with a TS-520 and wires in a ground floor apartment and I have never stopped exploring ham radio.

Over the years I have mostly been a reluctant CW op. Only doing it to pass the tests or to work some DX or make contacts in a contest. I never was very good at it. I suspect that is because I did not practice much (at all) and as a result I stuck to SSB operating. I never have really learned how to copy in my head but a few times in my ham life I have managed to get OK at CW. I have always wanted to improve my CW skills and I envy my friends that do conversational CW at 40+ wpm. Early this year I setup my station so I could use it remotely and then the Coronavirus showed up. Suddenly I am spending all of my evenings and weekends at home and getting on the radio often because I now have a way to do that during the week with the remote station. This led to getting on in the CWTs and spending more time on CW and that has led to doing CW ragchews and wanting to get better at CW and really learn how to copy in my head this time so I can do conversational CW. I am still working on the head copy stuff. And I still get very lost at times, but I am improving.

A big thank you to KM4FO for inviting me to join. I am happy to be here and happy to support CW Ops and the good things that CW Ops is doing for CW and ham radio.

I have tried most of wide variety of things this hobby has to offer but the largest constant has always been contesting. Mostly HF and mostly SSB but I also so CW and VHF/UHF contests as well. Many years were spent learning contesting at other people’s stations but in the last 18 years I have been building and working on my own station on a hill west of Austin Texas. I am active on almost all the bands from 1.8 MHz to 10GHz. And looking forward to many more years of exciting fun in this great hobby.