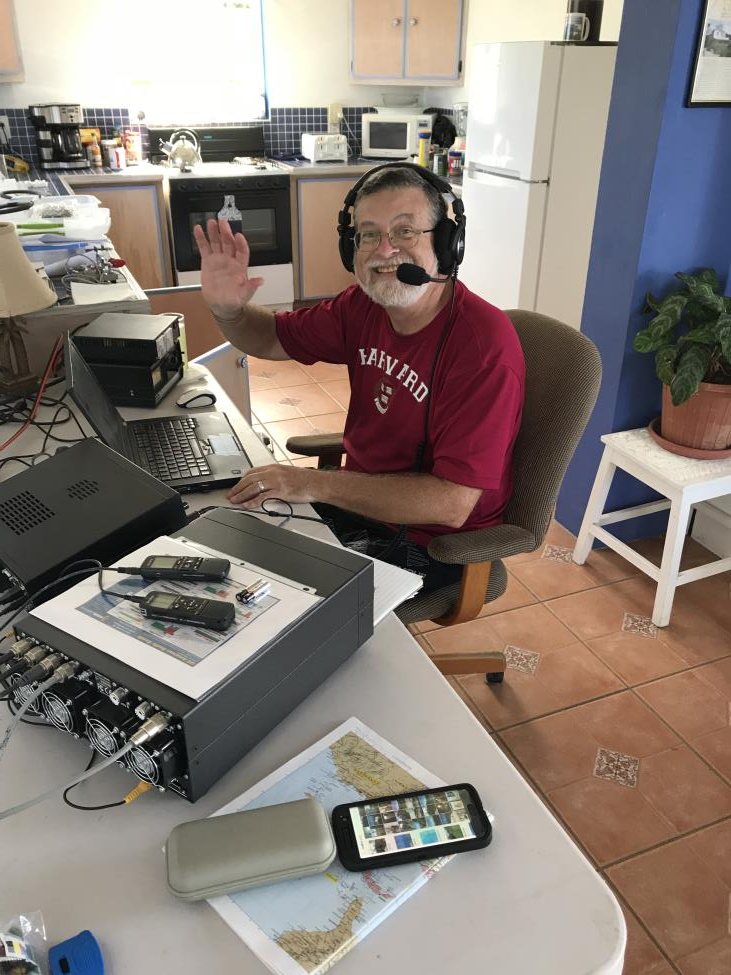 I was first licensed as a Novice in 1960, given the callsign WV2NXP. The impetus came from my older brother Jeff (then WA2CLQ, now K1ZM / VY2ZM). My license expired after one year, and I remained off the air until sometime in the early 1970s. When my younger brother Peter got a license (WB2JAM, now K3ZM), I simply HAD to get back in the game.

My first opportunity to participate outside the U.S. was to be the 80 meter operator at KP4EAJ in a multi-multi effort in CQWW CW in 1977. I went back to Puerto Rico in 1980 to be the second-chair 80 meter op with Jeff at NP4A, also in CQWW CW.

After a number of years staying home, I was invited to join the ZX0F CQWW SSB team at Fernando de Noronha in 1999. We re-configured Andre’s station for multi-multi and had a fabulous time. I got to do some serious operating during this contest, actually starting the contest as the 20 m op. The following year it was off to A61AJ’s station in Dubai for CQWW CW, where I helped build Ali’s 160M four-square array and enjoyed using that antenna as second op on 160M, again with Jeff. These two operations allowed me to meet and work side-by-side with some of the most famous contesters in the world!

To be honest, to this point all of these opportunities came my way because I am Jeff’s brother, but I think I held my own.

A number of contest operations from the Caribbean followed, including WP2Z, V47DM, J7DM, V26DM, VP2MZM (Peter’s call), VP2MDG and now VP2MDM. I have built quite a contest setup at the Gingerbread Hill guest house on Montserrat, and I get down there at least once a year. The photo is from October 2017 on Montserrat.

After my wife passed away from cancer in 2014, I was very blessed to meet and marry a wonderful woman, Karen Erickson.  Then a non-ham, Karen has since passed the Technician, General and Extra class license exams and holds K4ZDM.  Stymied by the antenna restrictions in our retirement community, we recently bought a place just outside The Villages. We now have three towers sporting a Bencher Skyhawk, a Cushcraft XM-240, wires, and a small 6 meter Yagi. A number of fellow CWops members have operated from the station in the last year.

I am an active member of The Villages Amateur Radio Club and the Florida Contest Group.