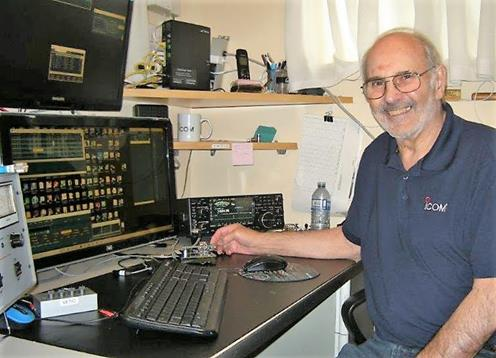 First thanks to Keith, VE7KW, for nominating me to CWops I am very grateful for his support. As well, my sincere thanks to those who sponsored my nomination making my membership a reality.

I was first licenced as VE7CJG in 1975 and operated for one year on CW only as was required in those days. In 1976 I wrote my advanced exam and passed which allowed me to use phone but I still found CW was my favorite mode. My first setup was a Viking Ranger transmitter a Hallicrafters SX 115 receiver and a 20 m dipole. My first contact on CW was with WN7YGO, Chuck, a retired railroad telegrapher and his code was so good that, as a newly licenced ham, it gave me confidence. After a year or so I assembled a Heathkit HW 101 transceiver and thought this was the greatest improvement.

From 1976 to 1980 I mainly worked DX and participated in local traffic nets but then my responsibilities as manager in the newspapers changed resulting in my work days becoming much longer. I had to put ham radio to the side for a while. In 1990 I received my two letter call VE7IO and in 1994 I took early retirement allowing me to have much more free time. From 1994 to the present I have done several upgrades to my station as contesting became my main interest. My good friend Jim, VE7FO, and I teamed up to provide our local club with contest training causing me to seriously look at making the station more user friendly. In 1995 I made my first trip to Dayton and Contest University in the later years was my source for ideas and information to improve my station and operating skills. Thanks to Tim Duffy, K3LR, and the entire CU team I now feel the station is fun to use as an M/M small contest station. Not just the physical improvements but operating strategies as well.

The station now has two positions each with an Icom IC7610, amplifier and computer all networked together with a third station manager computer. I use an 8×2 Antenna Genius antenna switch to handle the two radios into two towers and two wire antennas. One tower has a 3 element SteppIR and the other a TH6 triband. I use a 250 ft OCF antenna for 160, 80 and 40 as well as an 80 meter dipole at 90 ft. The station is setup to operate remotely.

I am looking forward to participating as a CWops member and, again, thank you all who helped with my successful nomination.