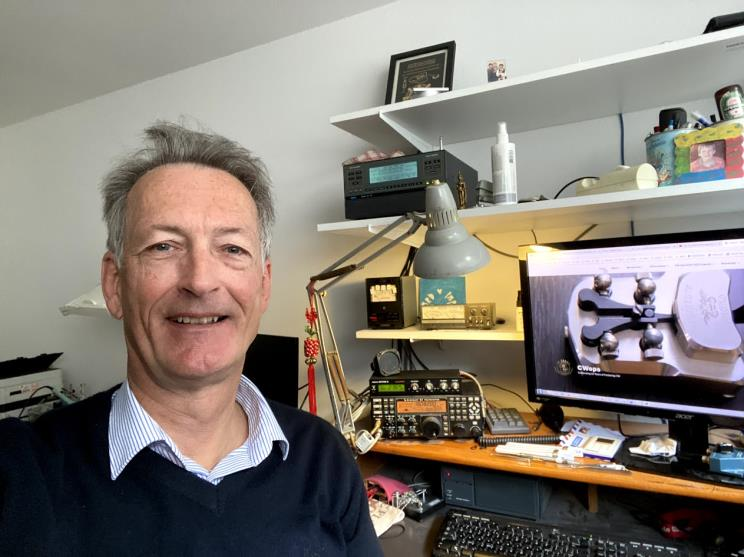 First of all, I like to thank Bud, AA3B, for nominating me as a CWops member, which was quickly supported by DL6KVA, N2IC, N5AW and W4WF. I feel honored to be part of this community.

I got acquainted with ham radio in my teens, I think I was 15, visiting an exhibition where ham radio operators had a booth displaying their hobby and making contacts all over the world. I was instantly amazed by the fact that you could do this with the power of a light bulb.

At that time, you could get a license not before you were 18 years old, so I took my time and learned Morse code first. I was taught and trained by PA0TY, a Marconist, who also used his radio skills in WWII resistance (great stories …). At the time of the exam I was able to copy 18 wpm whereas the requirement was 12 wpm, so Morse code was certainly not the bottleneck.

I also passed the theory part and had to wait yet another year until I was 18. Finally, I could hit the airwaves as PA0ERA in 1974. Starting with a XTAL controlled CW transmitter on 40 and 80 m and a BC-312 receiver. Later I bought from all my savings a Kenwood TS515.

It has been >90% CW from the beginning. In my hometown we had an active contest and DX group so I could improve my skills quickly. We went to Andorra, which was quite a challenge in those days, and my first DXpedition as C31NN (1977) was a fact. Later on, I visited more semi-rare ones in Europe. In 1993 I got the opportunity to join Pete N0AFW (now N0FW) and Mike (N9NS, SK) and his team to Kingman Reef and was active as N9NS/KH5K. This DXpedition also made me well knowledgeable about sea-sickness ….

In 1995 I joined Bob, KK6EK, and his team to Easter Island, XR0Y. This was a very nice DXpedition. I spent almost 4 weeks on the island, which was not overwhelmed with tourists back then, so I had plenty of opportunity to explore.

After marriage I settled in a village in the mid of the country where I could place a tower with a good antenna (SteppIR 3 ele). This was the best station I ever had, so I could enhance my DXCC score considerably to a Honor Roll position of 336 CW, 337 mixed. Due to changing callsign assignment policies, I acquired PA5EA (1998-2003) and finally my current callsign PF5X.

Back in the Netherlands I moved home again and had to scale back a bit.

With the introduction of screen modes like FT8, I am more focused on CW than ever before, because I strongly believe that if you cannot hear them, you should not work them …

You might also hear me as PF5X/P while activating a nature reserve. We currently have 184 designated areas (PAFF) in our little country.

In my professional life I am a Quality Manager with a major high-tech equipment maker for the semiconductor industry. I hold a Ph.D. in physics. Other hobbies are playing golf and being ‘captain’ of my 20′ longboat.

Meanwhile I already joined a few CWTs and it is real fun to work you guys and say hello on the air. I am looking forward working many of you in the years to come in our beloved mode of operation.