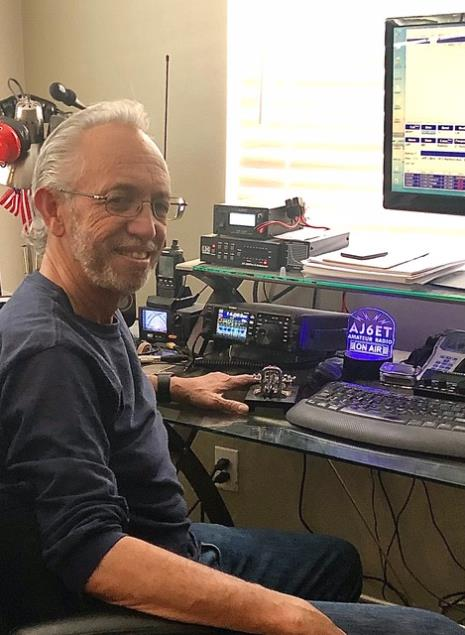 Very grateful to KK5NA, NJ6Q, N7MU and N4UCM for my nomination and needed sponsorships. Thank you for all you’ve taught me, for your patience and friendship.

Although my interest in ham radio began when I was proudly wearing my Troop 494 Boy Scout uniform, I didn’t fulfill my goal of becoming a licensed amateur radio operator until just a few years ago, in July of 2018.

My scout master and his son (our senior patrol leader) were ham radio operators, complete with a fully equipped radio shack, crystals and walls covered with QSL cards. At the time I was in wide-eyed awe and just felt it would be too difficult to learn and too costly to ever have my own shack. I was struck by the electronics bug, the meters, lights and sounds, and have retained a lifelong interest in electronics and radios.

An uncle was an electronics technician and he began teaching me the basics of Ohm’s Law and electricity, which I continued to learn through high school, building numerous Graymark kits in my electricity classes, the best of which was a short-wave superheterodyne receiver. This was followed up with my first purchase: an old Hallicrafter S-77A radio that provided countless hours of listening pleasure in those years.

I came to this country with my two sisters and parents, turning six on the boat from the Netherlands. We had been displaced when Indonesia obtained its independence from the Dutch and President Eisenhower allowed for the influx via the Refugee Relief Act of 1953. I grew up with a deep appreciation for what the United States had done for our family and in 1971, upon graduation from high school and not wanting to wait to be drafted, I joined the USAF as an Avionics/Aircraft Radio Repair technician and enjoyed an excellent electronics training program at Keesler AFB in Biloxi, Mississippi. I was lucky enough to work on many different aircraft and on a variety of military radio gear, troubleshooting and repairing to the component level. I spent from 1971 through 1975 in the Air Force and left with all the benefits of the GI Bill.

That GI Bill got me through two associates degrees (Science and Electronics) as well as a BS in Electronics Technology from the School of Engineering at California State University at Long Beach (CSULB). Even without the GI Bill, I continued at CSULB to finish with an MBA.

My career included being an electronics technician, engineer (test, quality, manufacturing and reliability engineering), and eventually into technical and executive management. Around 2000, I began studying commercial real estate appraising, attained an MAI designation from the Appraisal Institute, and was self-employed until my recent retirement.

As mentioned, in 2018 I obtained my license and have been enjoying so much of what ham radio has to offer. I joined our local club, the Moreno Valley Amateur Radio Association (MVARA), and I’m slowly getting my long-awaited shack in order and, with that, the long-awaited QSL cards on my wall.