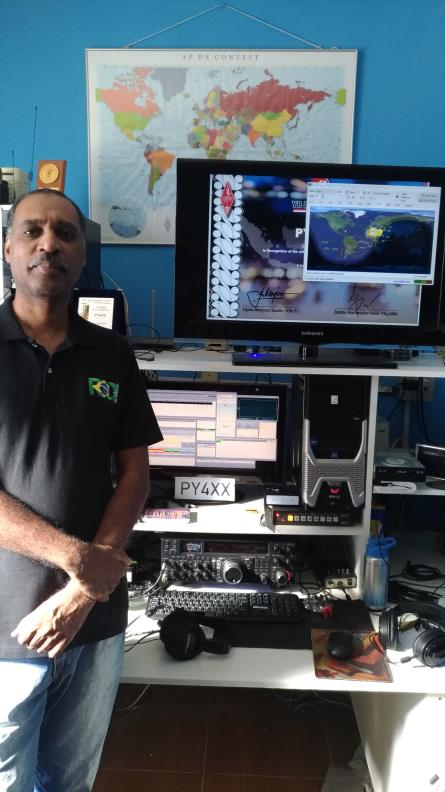 I started my life in contacts via RF, through the Citizen’s Band, when I met, at the home of a radio amateur friend (Weima – PY4QA), where I got to know the amateur radio, and what I fell in love with, when I first heard, the sound of dits and dahs.

It was love at first sight. Even without knowing what they were saying on the radio, I was broken with what I came to know was called Codigo Morse.

I started taking classes with my friend, and later, with a CW teacher (Guimarães-PY4CY) at LABRE – League of Brazilian radio amateurs. In January 1988, I moved to Dourados-MS for work reasons, and there I met some Citizen’s Band who were preparing to carry out the tests for radioamadorismo. Only they didn’t know CW and had no one to help them. I offered to teach them, and for 1 year, I prepared them. In November 1988 we went to take the tests, and they all passed, except me HI HI HI. I didn’t pass Legislation. HI HI HI. In January of ‘89 I took the tests again and started receiving the PT9CEL code.

Two years later, also for work reasons, I moved to Rio de Janeiro-RJ and changed class from B to A and acquired the callsign of PY4CEL. I changed to PY4XX in 2008, when in a contest, I lost several points, due to many radio amateurs receiving PY4CL instead of PY4CEL. I love contests in CW, RTTY. I like homemade assemblies. Being a member of ARAUCÁRIA DX GROUP, RIO DX GROUP, I have contributed to the score of my clubs in several competitions.