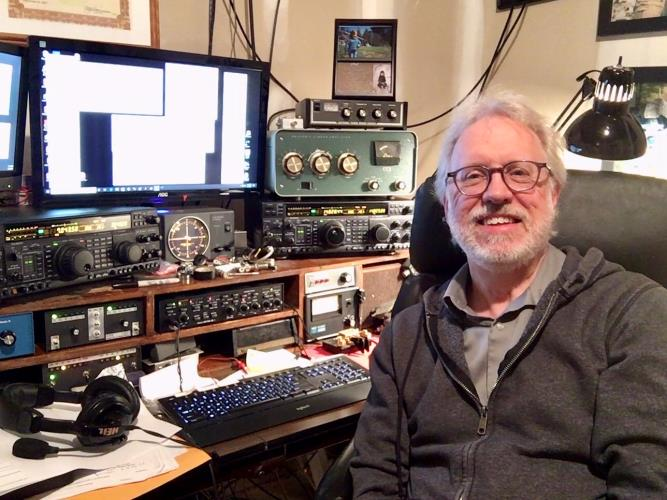 I first heard about the weekly CWT contests last January. An hour-long, weekday evening, CW contest, was perfect for me and my full schedule. After the first night, I was hooked and then I needed to know more about “what’s this CWops group?” The rest is history! With that, I’d really want to thank Bud, AA3B, for nominating me, and Jim N3JT, Greg WA3GM, and Curt N2ZX, for sponsoring me.

I was first licensed in 1975 at age 14 as WN2CFP. Several months later I passed my General class ticket, and my call was changed to WB2CFP. I was very active for the next several years especially in contests, including a few years with the W2SZ/1 VHF multi op “Mount Greylock Expeditionary Force” mostly operating 432Mhz CW, but I was really an HF guy.

In my 20’s my Ham Radio activity dropped off, as I worked at a frantic paced start-up company, I got married, kids, life, and then I changed jobs in1991. There I met Curt, N2ZX (then WA4VKD). We were the same age, and found out that were not only both hams, but had both became hams almost the same time and we shared a lot of the same interests within ham radio, including CW and HF contesting. Curt really got my Ham juices going again! He too never “got around to” upgrading from General class. But then in the mid 1990’s the FCC introduced a new vanity call sign offering. But to get a short call sign, you needed an Extra class license. So, we both set out to studying and about month later we both took and passed the Advanced class. We kept studying, and a few weeks later we passed the 20 wpm CW test then the Extra class written. As soon as the vanity callsign gate opened, I applied for and got K2YR. Curt later received N2ZX. Anyway, the 10+ years of off the air and off contesting was eye opening when I got back into it. Computer logging and radio interfaces? What’s that? No more dupe sheets was the best news ever!

Ham radio is likely genetic for me. My Dad, W2ODC (SK) was a voracious CW operator. The ultimate CW rag-chewing operator. In his later years, you could catch him on 160 m CW chatting for hours. He’s the only person I’ve known who could make a bug sound not-like-a-bug. His Dad, my grandfather, was K2CKV (SK). My Mom was WN2GEP (SK). I have two Ham uncles, Jim, W2DYL and Don, W1TSN (SK). Two of my big brothers are hams, Eric, AI7AA, and Dave, N6KLG. The guy that lived across the street was a ham! I likely learned CW in my sleep.

My current station is set up for full SO2R using two FT1000MP’s with a microKeyer MK2R+ and an Array Solutions 6-Pack switch. I use a Kent iambic paddle. I have an Alpha 86 and a very old Heathkit SB200. I have a several home-brew boxes for Beverage switching and auto switching bandpass filters. My antennas are not great now. I have had some severe weather damage in the last couple years. I do have a 2 element 20-10 Quad, but currently just various inverted V’s on 160, 80 and 40. I live on 25 acres, mostly wooded, so lots of antenna hangers.

I am currently employed at General Electric Research Center as an Electronics Specialist. I mainly work on healthcare imaging, and more recently IR imaging systems for material evaluation.

I am married and have two adult out-on-their-own daughters, so my shack visitors are typically one of our two cats. They like the warmth of the radios.