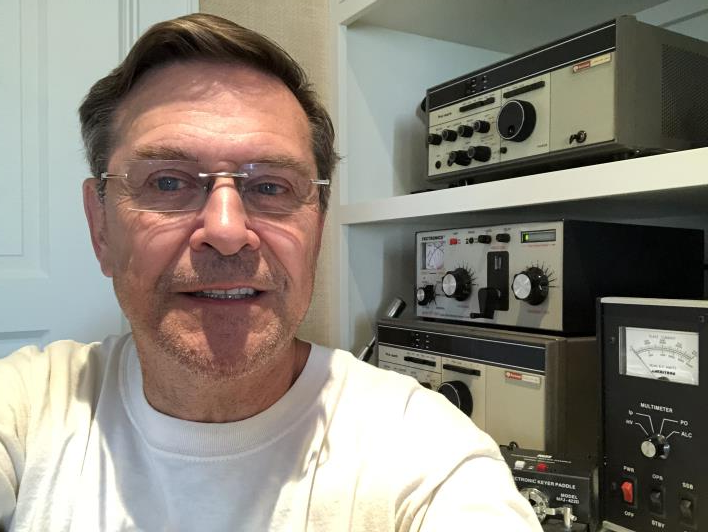 When I was 10 years old my Dad, an electrical engineer who designed jet engines for Pratt & Whitney, decided that he wanted to fulfill his childhood dream and become a ham. Somehow my brother managed to finagle his way out of being tapped to get a license with my Dad, so I ended up being his partner in learning the code and theory. I vividly remember the summer we spent 3 weeks on Cape Cod studying all day, every day, from morning till dusk for the FCC Novice test. Morse code was easy for me but understanding the technical stuff was much more complicated. I ended up memorizing all the answers. Dad passed his test a few months before me and became KN1WXZ.

Shortly thereafter I became KN1ZJA. We shared a Heathkit DX-20 with a chirp on 15 meters and a HR-10 receiver. Within a year we both passed the General exam. While I was away in college Dad studied hard and got his Extra and became AB1R.

Over the years I was on and off the air. The usual stuff managed to get in the way; kids, work, 9 relocations, etc. Skipping forward to 2019 I was now finally retired from a 40+ year banking career and 10 years as a financial services consultant. I finally had my first real opportunity to get reacquainted with ham radio. I still had the Collins S Line that my Dad had purchased in the late 60’s. I had that refurbished recently. In addition I managed to add more equipment to the lineup including two HF-380’s, two KWM-360’s, a Yaesu FTDX-5000MP, a Signal One CX-11A, three Collins 30L-1’s, and two Alpha 87A’s. I even managed to find a “never used still in the factory plastic bags” Collins S Line. It really belongs in a museum. But I’m still decades behind ham radio today. I still have paper logbooks and send our paper QSL cards. One of my goals is to start logging everything in a laptop computer. Having lived in CT, NY, GA, DE, the UK and CA I finally retired in Asheville, NC a few years ago. Now I finally have some time to enjoy ham radio. So my station is pretty much set up with 3 different operating positions and enough gear for six autonomous stations. I’ve got a Carolina OCF antenna at 60FT and hoping to install a few more SteppIR antennas this fall.

It’s really a pleasure to be joining the CWOps organization. My passion has always been CW and now I can enjoy the hobby with hobbyists with similar interests. And just in time for some heightened solar activity.