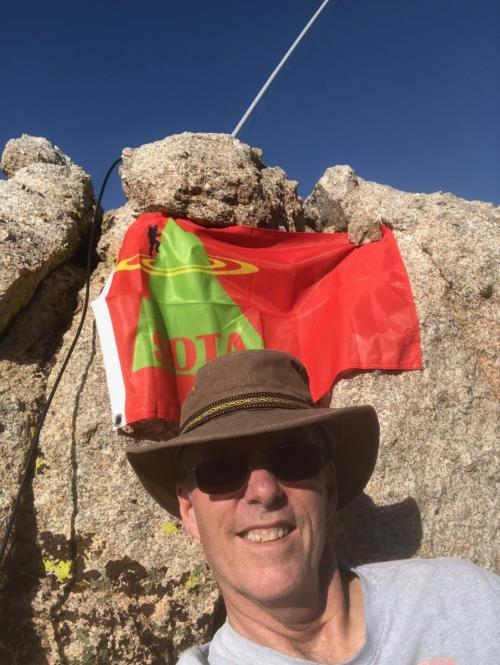 I became interested in the magic of radio after playing with walkie-talkies as a kid. Then in 5th grade my father, an electrical engineer for the phone company in Los Angeles, bought me a Heathkit GR-64 shortwave radio that I had fun building. I enjoyed listening to broadcasts from around the world, but I didn’t pursue a ham license back then.

My first exposure to Morse code was learning it in Boy Scouts for the rank of First class. Boy Scouts also introduced me to hiking and backpacking in the local mountains.

After high school, I attended the University of California at Irvine and left with a degree in computer science back in 1981. I worked at UCI briefly in the same department as fellow CWops member Dana K6NR. Since UCI, I have worked as a software developer and more recently transitioned to doing IT work.

I decided to get back into radio in 2003 and wanted HF band privileges, so I needed to learn CW well enough to pass the 5 wpm test for a General license. With the help of some Windows software, I managed to pass, but got side tracked into the VHF bands with some volunteer work.

After discovering someone still made quality radio kits, I acquired an Elecraft K2 and got busy with my soldering iron. Because of my interest in hiking and radio, SOTA activating was something I just had to try. I quickly discovered SOTA SSB & QRP was a real challenge, and that CW was the way to go. So, I jumped on lcwo.net and dusted off what was left of my CW skills. I made it through the 40 characters after getting sidetracked again and having to start over a few times.

For SOTA, I needed a more portable radio than a K2 and so I went with a KX3 which I also use at home with their 100 w amp. I found that dragging a radio, 30’ telescoping mast, and antenna up to a summit was the motivation I needed to call CQ and take the plunge. I was expecting a pile up, and I got one. I was hooked, but my CW skills were still lacking.

Not being the most disciplined person, I joined CW Academy to improve my skills because I would have to make a commitment to attend the classes and do the homework. After attending the basic, intermediate and advanced classes, I have made significant progress and I am grateful for the academy and my advisors.

Today, my wife and I have two grown sons and 1 grandson with another grandchild on the way. Retirement is not far off for me.

Hiking and backpacking are still a passion of mine. I thru hiked the John Muir trail back in 2011 and try to get out in the High Sierra for several days every year.