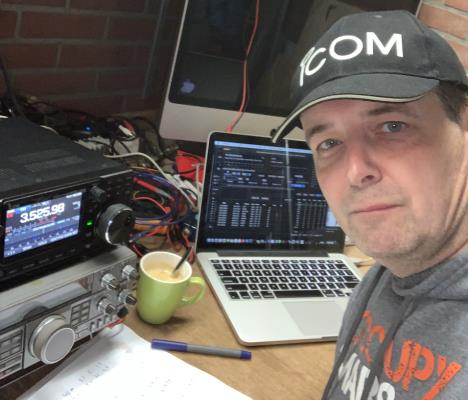 First, I’d like to thank Buzz AC6AC, my Basic, Intermediate and Advanced CW Academy Advisor who nominated me. And thanks to N4DPM, OK4MM and DJ4MX for sponsoring me. Also thanks to W4IF, my CWA Beginner Advisor where it all started. Also many thanks to the co-instructors and my classmates.

I live in Hellendoorn, a small village in the eastern part of The Netherlands. I’m 47 years old. I became interested in radio when I was very young. I had a lot of fun with a crystal radio. A miracle to me that it worked without battery. I got my license when I was 17 years old. It was a license for VHF and up at that time. No Morse included. I had a lot of fun working on 2 m, and experimenting with antennas. But as I got older, work came, family came and the ham radio hobby got out of my sight.

In 2007 I got interested in HAM radio again, and at that time my license was upgraded to a full license, so I could also operate on HF. I got interested in CW, and did a course with a straight key. Made some QSOs but never got really over my key fright. As I was m not a phone guy, again the hobby got in the background. Till 2020 when I started to work in the digital modes on HF. But during the year I got interested in CW again, and tried some self-study. That didn’t work. I came across the CWops CW Academy, and decided to sign up for the Beginners Class.

And so I started in January 2021 in CW Academy. What a great way to learn CW. It’s not only about learning CW, but also about making friends. Of course it is hard working, but also making a lot of fun. I’m really happy that I came across CW Academy. Thanks to everybody who puts a lot of effort in it, also behind the scenes.

One thing to mention here is the “Buzz’s Super-Secret No merit/No demerit Homework” of AC6AC. I you want to know what it is? You have to sign up for a class with Buzz, because it is secret 🙂

Since May 2021 my log consists for almost 100% of CW QSOs. My main interest is contesting.

I work as an IT architect for the IT systems of the railways. Some other hobbies are beer-brewing, BBQ, 3d-printing and repairing old mopeds.

I hope to work you on the air!