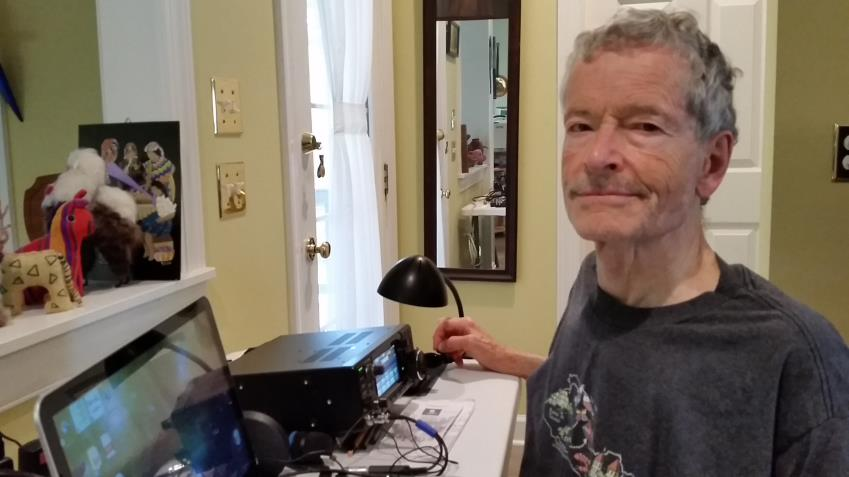 I am delighted to see my name and call in the roster of distinguished international radio amateurs on the CW Ops website! Sincere thanks to fellow members George, K4EOR; John, K4BAI; Jim, N3JT; and Gary, N5PHT for their sponsorship and to Mac, NN4K, for his radiogram welcoming me as a life member.

My ham radio career began in Cleveland, Ohio, at age 14 when my friend, classmate, and Elmer Mike, K8GJM (now W9NY) showed me how to communicate on 40m using a war surplus ARC-5 transmitter, SX-99 receiver, and wires in the backyard. With his help, I started as an SWL and in 1958 became a Novice as KN8LBQ. I built a crystal-controlled DX-40, acquired an SX-99, vertical antenna, and homebrew dipole, and got on the air from my bedroom. Upgrading to General the same year, with 13 wpm CW, I came close to WAS and worked a few DX stations including an FR7 on Reunion Island – my first rare one! I improved my station with a VFO, HQ-110C receiver, and automatic keyer, for which Mike and I homebrewed a paddle with a flexible hacksaw. We founded a radio club at our high school, set up a basic station, and hung sloper dipoles off the school’s clock tower – no antenna restrictions back then! We took up AM on HF and six meters. One day we tried SSB HF mobile on the New York Central Railroad, using borrowed KWM-1 and Cosmophone transceivers in a passenger car with a long-wire antenna on the roof.

While in college I built an HW-32 to work SSB mobile and joined the campus radio club, W1YU. Then academics and foreign adventures diverted me. In Vietnam my only radio was a PRC-25 VHF-FM rig for directing artillery fire. Back In “the world,” I upgraded to Advanced and operated a Drake TR-4 and L-4B linear into a vertical on an eastern seashore – my best antenna site ever. But voice modes had taken hold; CW was a fading memory. Professional and family life over the next four decades left little time for hamming, with only brief escapades as an HI8 in Santo Domingo, PY3 in Rio de Janeiro, and V49 on Nevis. My wife Karen earned her Novice ticket as KB4IKP, but after watching me struggle to raise antennas and repair coax chewed by squirrels, decided it was not for her. Through those years as a graduate student, college teacher, CIA analyst, and Foreign Service officer, I kept my license and call sign but was rarely QRV.

Retirement offered opportunity to reconnect with ham radio at my latest QTH in Georgia. I joined the Columbus Amateur Radio Club, W4CVY, and rediscovered the fun of Field Day in the woods, where one of three HF transmitters was devoted to CW. As one of the club’s few members who still spoke Morse, I was quickly recruited for the CW team. The club also offered license exams. So for months I spent an hour daily with the Extra license manual to refresh my high-school math, catch up with solid-state and digital technology, and pass the test in 2012. In recent years George and John have drawn me into various on-air CW activities: QSO parties, QRP CW fox hunts, NAQCC, SKCC, and now CW Ops. Living in a CCR neighborhood, I appreciate how far you can reach with code when limited to low power and stealth antennas. And I’m gaining more confidence about plunging into contests for at least a few hours. My compact station (in the photo) comprises an IC-7300 HF transceiver, Vibroplex iambic paddle, Bencher RJ-1 straight key, dynamic mike, computer, and power supply. A 2×4-foot utility table accommodates the gear, except for a G5RV inverted vee dipole, ground-mounted vertical, and remote tuners. With this modest setup I’m rediscovering the joy of CW and regaining my “fist” from the early days. Although I speak other languages, it seems easier to become fluent in Morse, which — with its vocabulary of Q signals and abbreviations – is, even more than English, the Esperanto of the airwaves.