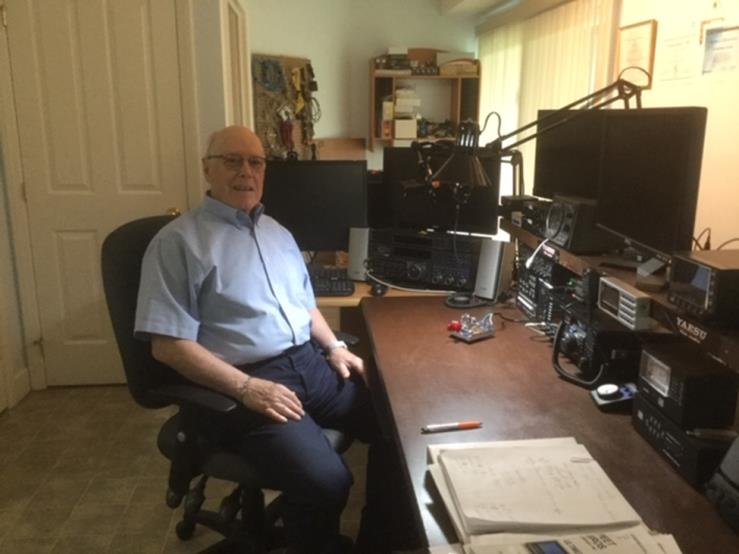 I am very happy to be nominated and accepted as a member of CWOPS.

I wish to thank Pierre (Pete) VA2CZ for his nomination and all the contest group headed by Guy VE2BWL, for their invaluable help.

When I was 11 years old, I was already an avid reader of Popular Mechanics and a small advertisement caught my attention: Become a ham radio Operator – Join ARRL – and the yearbook was offered for sale.

I asked my dad if I could get this book, and he did get it for me for my birthday. He smuggled it across the Canadian Border from Newport Vermont, where his American friend had received it for us.

I read it from cover to cover, trying to understand what electronics was all about, I was fascinated.

Using old radio parts I was able to build a crystal-controlled transmitter following the diagrams, I was able to modulate it, and went on the air not knowing this was illegal. Luckily a local ham heard me, found out who I was, and got in touch with me to fill me in. I stopped.

Later on, I joined the Royal Canadian Air Force and was sent to electronics school with the goal of becoming a radar technician. I never did get my ham license for whatever reason.

I spent my working life in Insurance as self-employed Insurance Adjuster in Montreal and surroundings. Eventually I became a consultant to insurers regarding computer networking and equipment & data loss claims. I never lost my interest in electronics and tried to keep up to date.

When I retired in 2013 (aged 73) I knew then that I would try and obtain my long-delayed ham radio License in Canada, knowing that the CW requirement had now been waived.

I passed my Basic license that year and started building my shack and got to meet a great group of people whom have become my friends since. It really has become very central to my retired life, a lot of enjoyable hours.

However, although I did enjoy SSB and the digital modes, part of the spectrum remained a mystery with all those dots and dashes, I was encouraged by Guy VE2BWL to try and learn Morse code. I thought I was too old.

I took the plunge at the beginning of 2019 by using the computer software available, Morse Runner and others. I found it very difficult in my case probably because of a deteriorating scratch pad (short term memory), but I kept at it, every day.

After a few months I registered for the CWA course Level II given by Ron Norris VE3FXX, for which I wish to thank him, I found it very challenging, but Ron was most encouraging and patient.

I have been practicing at every chance I get, and last weekend I was invited to participate in the RAC Canada day contest in CW, I was very nervous about that, but I did it for an hour, I was exhausted….but I did manage to hold my own (I think). VA2CZ was there and he decided to sponsor me for membership in CWOPS, others in the group were kind enough to agree.

I still have a way to go, but now I know that I can do it. CW it has become my main interest in ham radio, and I am honored to be a member of CWops.