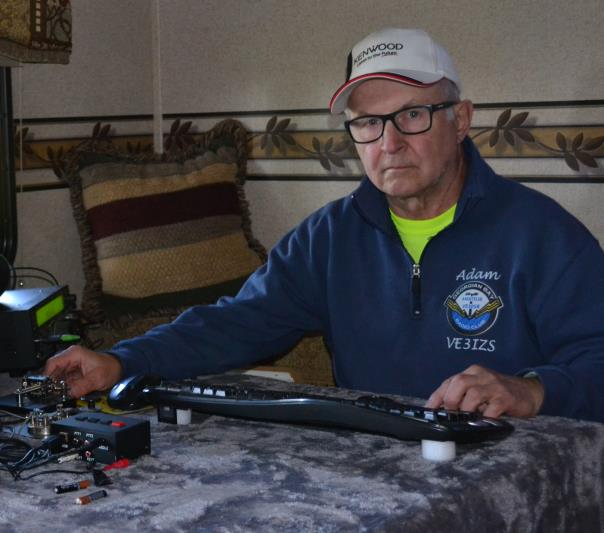 First, I would like to thank John N8AA for nominating me and Tom K4TZ and Frank K1EBY for sponsoring me to become part of this group. John was my Level 2 CWA advisor last fall and kept my interest in the CWTs along with our regular weekly skeds. I now look forward to working CWTs.

Growing up I always had interest in radio and electrical things, sometimes I would tinker with our shortwave radio to a point where it would no longer receive. Not sure at that time if the tubes were put back in where they belonged or turning the tuning slugs had something to do with it. Either way it would cost my parents to restore it back to normal and of course I suffered the consequences.

Electronics was always something I wanted to pursue but I always found more important things like having fun and things that teenagers do. It wasn’t until 1967 that I attended technical vocational high school in Winnipeg, Manitoba, enrolled in electrical/electronic program with an amateur radio course offered to the third-year students, but I didn’t finish the program. Our family moved and I was enrolled in regular school for remainder of my school years.

Later I finished the four-year electrical apprenticeship program and worked in the electrical trade. In 1974, I left home, moved to Ontario and sometime later got married and started a family. Being more home bound, I decided to get my Amateur Radio license. At that time, 1978, the code was 10 wpm for Basic which I passed and received my license. The following year I got my Advanced with the code requirement at 15 wpm. First rig was and still have it, Heathkit SB101, not sure if it works anymore but it has sentimental value.

In 1984 I went back to school as an adult student to complete an electronics engineering diploma program. I spent a few years with the Kitchener Waterloo Amateur Radio club and later moved farther north to take a job in the hardwood veneer industry. At that point amateur radio was put on a back burner till about 2000 and I only operate on 2m during my travels. CW was almost forgotten; I couldn’t even decipher repeater IDs. After the kids left home for college and later moved out on their own, I joined the Georgian Bay Amateur Radio club about 30 miles away located in Owen Sound, Ontario. I’m still with the club and active in most events. In around 2009 I started to dabble in CW but couldn’t put words together even at 5 wpm. I started listening to W1AW and using Koch Morse trainer software I gained more desire for picking up CW, but I was not really committed. So last fall I decided to join CW Academy for Level 2 and see if I can improve with some more help. I was surprised with the results.

I enjoy working weekly CWTs and hope someday I won’t have to struggle to copy some call signs.