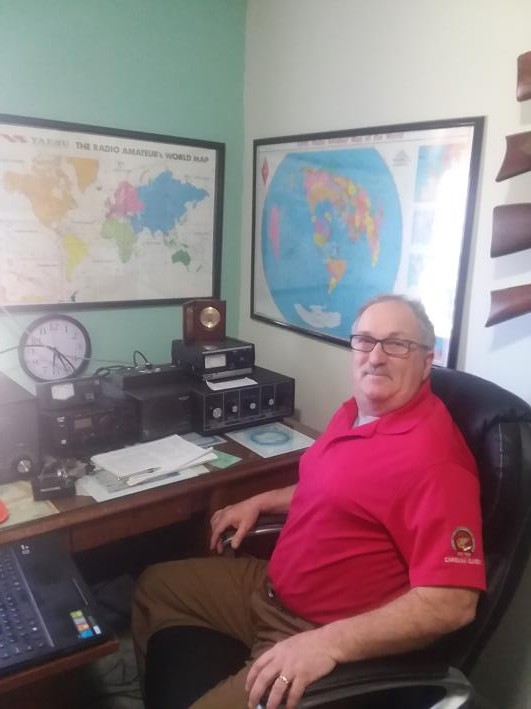 I was first licensed in 1972 as a novice with the call WN4BUJ, my father was also a ham who taught me code and administered the test. Now over 46 years later I recall taking that test very clearly and even more so the day when my license arrived in the mail some weeks later. I was so excited to get the license that I met the mail man at my neighbor’s house and ripped the envelope from his hands when I saw it and took off running home in great glee. My father supervised that first QSO as he knew I would be nervous with all the excitement, and I was. The contact was with a fellow novice in South Carolina, I still remember that well.

Operating as a novice was so exciting, the idea of the wire strung up in my back yard reaching the wire strung up in some other guy’s backyard hundreds of miles away was fascinating. Making contacts and getting QSLs for those contacts in new states was quite a thrill. My first QSL card was from WN9JKV, an Indiana station. I lost that QSL card decades ago but still recall that.

One day I heard a station calling CQ in the novice portion of the 15m band and he signed the call WN4BU… and at that point I thought someone was bootlegging my call. He finished his call as WN4BUL, I answered him and when I signed my call he too thought at first that his call sign was being bootlegged until he heard the final letter. WN4BUL, Steve and I, WN4BUJ had an eyeball QSO later that day. We both were tutored by our ham fathers and coincidentally passed our tests very nearly the same day. We became friends and studied together to get our general, advanced and then extra class licenses. We were teenagers when we got our two letter calls, Steve is N4SL and I have the call N4IY. I recall the feeling that I had when introducing myself at local ham radio club when I said I was Terry, N4IY at only 18 years old. Having a two letter call at our age was status, we thought we were pretty darn cool, that was fun. That was 1975.

Time to get serious a bit and I started at the local community college at my elder sister’s urging. I hated high school and was not thrilled at the idea of being back in school immediately after escaping high school. Once I was student for a few months I thought to myself “I love this place, I never want to leave.” College was great, everything I hated about high school was not there. I thought “What should I major in? I don’t know, I like ham radio so I will try electronics.” My plan was no more thought through than that and 41 years later I finished a career in electronics as an engineer and then finally as a professor which I retired from May 2017. It was my involvement in ham radio that was a guiding force in all of this.

My friend Steve, N4SL went to the community college in the same program as I. Steve spent 35 years as a design engineer and is retired now also. Steve and I still communicate over email daily. We have been friends for 46 years now. His one of the important friendships that I have made in ham radio. There are many others.

While a student at Texas Tech I joined the Radio Amateurs at Texas Tech (RATTS) and we held our first Field Day at the Crosbyton Solar Collector facility which uses a large mirrored parabola to reflect sunlight into an intense beam and superheat steam to drive turbines to generate electricity. We took a picture of our tower climbing and antenna raising with that large parabolic mirror in the background. I was on the tower passing the triband Yagi up to a friend. That picture made the cover of QST magazine in the November 1981 issue, the four of us were thrilled.

I wanted my dad to see that issue for sure as we had become a ham radio success, what fun that was. Sadly, my dad, K4BY became a silent key that same month due to a heart attack.

The legacy of ham radio continues in the next generation as my son Pat is KC9ADY and my wife Becky is KB9JLH. Becky and Pat have only used their privileges to talk to me on VHF HTs but I am very glad for that.

I had a long hiatus from having a station at home and then after marrying and getting a house with some land I started back into active operation. I operated QRP solely for the first 19 years after that hiatus using an Index Labs QRP Plus. I achieved WAS on 75M SSB with that rig. I really wanted to see if I could succeed in getting WAS SSB instead of CW. Hawaii was really challenging but an elevated radial quarter wave vertical did the trick.

I gave up QRP and now own an Ameritron AL-572 amp driven by a Yaesu FT-897D. It is fun to really be a big signal into Europe on 40 meters using the 1000 watts out from the AL-572 coupled toa good antenna. QRP was fun too but I wore it out for me.

I enjoy meeting new friends on the air with about 95% of my contacts being CW. Morse is my second language and I love to speak it.