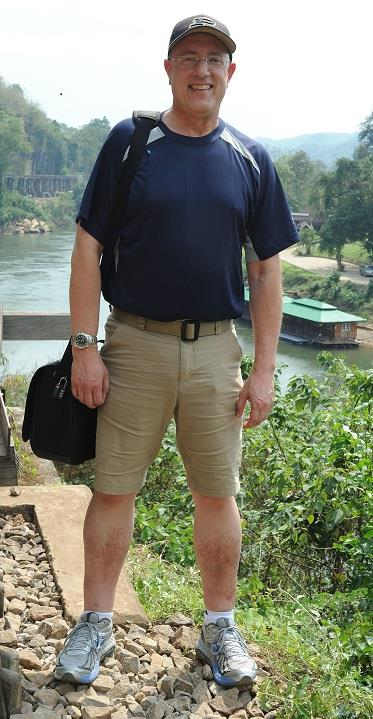 First off, many thanks to Mike Steene, W7GF, for nominating me for membership and subsequently to everyone who provided sponsorship to allow me to become a CWops member!

My interest in amateur radio began back in my early high school days in southern Indiana – a friend of my father was a ham and I loved going over to his QTH and listening to those big Yaesu radios – it opened up the world for me. My father was also interested in amateur radio due to the fact that he had been a communications technician in the U.S. Navy years earlier. We met another local ham, Glen Woodard, WB9ORM (SK), and he was gracious enough to administer the Novice exam to us back in December 1976. My father and I both passed the exam and we were issued consecutive callsigns, mine was WB9ZPK and his was WB9ZPL. I stayed a Novice class op for quite a few years before upgrading to Advanced, and eventually Extra. Upon earning my Extra class license, I immediately applied for a callsign change and was given my current call, KN7T.

CW has always been my favorite mode – I enjoy the challenge and was able to learn it easily. As a musician beginning in grade school all the way through most of my college days, I know that helped me learn Morse code faster. Our first ham shack consisted of a single tube (6T9) three-band CW transmitter that was crystal controlled. It produced a whopping 5 watts output. The receiver used plug-in modules and was capable of three band reception. We homebrewed both of those rigs. Later, we added a three tube (1625) amplifier that upped our CW output to around 50 watts and that was a homebrew unit too. For antennas, we built a three band 4 element quad that sat on top of a 35-foot tower. That antenna covered 10, 15 and 20 meters. We also built a 40m double bazooka wire antenna to give us some low band capability. We eventually upgraded the radio in the shack to a Kenwood TS-520S and that rig served us well for many, many years.

I attended Purdue University and graduated with a BS degree in Electrical Engineering Technology. Upon graduation, I immediately went to work for the Boeing Military Airplane Company in Wichita, Kansas. A year and a half later, I transferred to Palmdale, California and worked at Edwards Air Force Base, supporting B-52 weapons programs for Boeing. I also worked on weapons programs for the B-1B and B-2 as well. I met my XYL, Wallee, while working in California, and we’ve been married now for over 32 years. The Edwards AFB job lasted another 6.5 years and it was time to move on again – this time I transferred to Boeing Commercial Airplanes in Everett, Washington. I worked on the original 777 program as a systems engineer and have since supported various projects for 747, 767, and now the new 777X. I’ve been with Boeing for over 35 years and am planning on retiring July 1, just around the corner!

During many of those years after college, I was only intermittently on the air. I finally built a better shack and more antennas after I moved to Washington. The XYL and I decided that we wanted to have a bigger property so we moved again in 2011 to Snohomish, WA and we currently live on 7.5 acres so there’s plenty of room for antennas. Today, my shack consists of a pair of K3’s and an Acom 1000 amplifier. I have a second operating position that consists of a Collins S-Line, 32S-1 transmitter, 75S-1 receiver and 30L-1 amplifier. The Collins rigs need some repair and upgrading, a project that I will undertake in my retirement years. For antennas, I have a Traffie Hexbeam on an AB-577 military tower and a 40/80 extended doublet. Future plans include installation of an LM-470 tower and a Moseley PRO series Yagi.

As a CW aficionado, I have a nice size collection of keys, bugs and paddles. I also have a number of electronic keyers, including an old Hallicrafters TO-1 that needs restoration. These days, my primary interests in amateur radio are CW contesting and chasing DX. I’m closing in on 300 countries worked and hope to one day make Top Honor Roll. More recently I enjoy working the weekly CWops mini test as time allows – it keeps my CW skills up and it’s a great way to spend an hour of time every Wednesday evening. I’m also trying to master the art of SO2R for contesting.

I look forward to meeting many other CWops members on the air in the coming months!