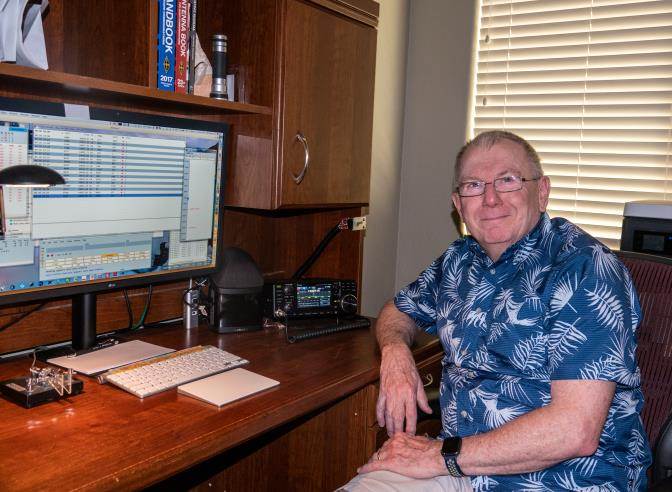 First off, thanks to good friend Steve, K3SW, for getting me back into ham radio and sponsoring my membership along with AA3B, N8AA and K3WW. CWT has been a lot of fun and I’m glad to be aboard as CWOPS 2263!

I was first licensed in 1959 as KN3IAM in Philadelphia and a few months later got my general class as K3IAM. I was first on the air with a Hallicrafters S-76, a Globe Chief 90 and a long wire with a homebrew antenna tuner. Got a lot of RF burns with that! Ham radio waxed and waned through college, but CW was always my favorite mode, especially the CW sweepstakes. Back then, you could work any 40 hours over two consecutive 33-hour weekends and I remember coming up from my basement ham shack with CW ringing in my ears. I still have some SS logs going back to the 60’s, including the necessary dupe sheet! How things have changed with N1MM logging.

My dad, K3ZQN (SK) got me into Navy-Marine Corps MARS, now defunct, in the late 60’s and I kept involved after moving to NY as W2GRU. When the sub-bands were announced, I decided it was time to get the Extra Class license, which I did in the early 70’s, sweating the 20 wpm code requirement but managed to pass. As MARS call sign N0JCI, I became more involved in volume message traffic handling via SSB and RTTY, restoring surplus military equipment in the process. During a DOD billet cutback in the mid-seventies, I volunteered for what was normally an RM1/C billet as civilian Director of the first and third Naval district, call sign N0ASI/NAV1. At the same time, my Dad was the volunteer director for the 4th Naval district as N0ASD/NAV4! That was a lot of fun and work along with a full-time engineering job. I think I burned out on all that, though.

After moving to RI in the 90’s, the bug bit again and I was on the air again as AA1SE. I was only on the air for a little while and we then retired to AZ. Steve, K3SW, bugged me about getting back on and I was able to resurrect my Extra Class license by taking the technician license test from volunteer examiner Quinton, NU7Y. I got an IC-7300 and AH-4 antenna tuner and was back on in 2017 as AA7ST! Funny but if you adjust for inflation, the IC-7300 in 2017 cost as much as my first novice rig! Now in an HOA-restricted community, stealth antennas became my way of life. I have an MFJ 33’ fiberglass mast with a wire running in the middle that I raise Tuesday night and collapse Wednesday night for CWT (and of course as needed for CW SS).

Along the way, I learned how to write software and have a company (CCDWare, Ltd.) that sells astronomy-related software to this day.

My wife Diane lovingly and graciously puts up with all this nonsense and is incredibly supportive in whatever I do.

When I think back to how far radio technology has come in the past 60 years, indeed technology in general, I am astounded. It has been an amazing ride.