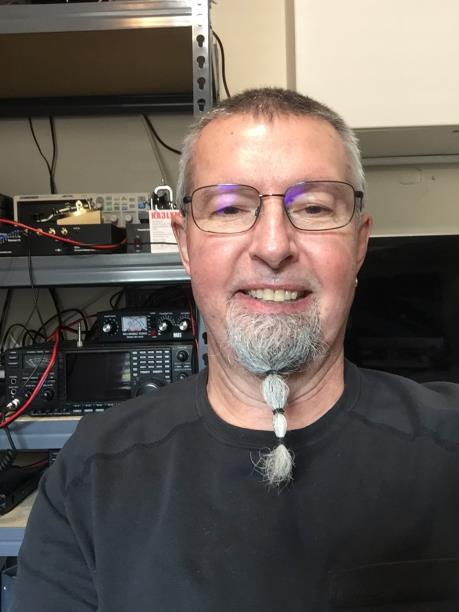 First, a sincere thank-you to CWA advisors Ron VE3FXX and Jerry AC4BT for putting up with me; These dedicated individuals provided instruction, resources and inspiration to me and fellow classmates. Also, thanks to AA3B Bud (nomination) and the other kind folks who sponsored me!

I have always been interested in electronics in general and radio in particular. My grandfather would take me junkyard scrounging and he gave me my first short-wave receiver back in the early 60’s. I didn’t really do anything with CW till 1973 when I enlisted in the army (my draft nr 63 as I recall). I spent 18 weeks in a 14-week course learning Morse code! We had to copy 500 characters / cut numbers (5-character groups) with less than 10 errors at 18-WPM to pass… just barely avoided cook-school!

After 6 years in the military, I continued working for Uncle Sam and spent most of my first 20 years of civilian employment overseas. In 1983 while stationed in New Delhi, India, coworker and ham operator Dick Miller (sorry Dick, I can’t find your call sign!) got me interested in ham radio and administered the Novice exam, code test and all, to me. I was assigned KA3LXM and received an Indian reciprocal license VU2LXM. For the next 2 years, I worked exclusively CW on an ICOM 730 and a quad antenna. Life got in the way, and that was the last of ham radio.

Fast forward 35 years and I’m still married to Linda for over 40 years; kid and grandkids. Uncle Sam paid for my degrees and I held positions as mathematician, systems engineer, technical lead, program manager yada, yada. Teaching at the local college was one of the most rewarding things I have done – I have the utmost respect for anyone teaching at any level. Never “worked” a day I my life – Always enjoyed what I was doing! I retired from the government, General Dynamics and few small companies.

I have never understood folks who say they are afraid of getting bored when they retire. I still don’t have enough time! Typical home maintenance, care and feeding of a couple boxer dogs, tinkering with electronic projects and associated software, a couple motorcycles, welding, small machine shop in the garage, beer brewing, bread making (especially sour dough!) everything eats up time! And then I decided to get back into ham radio!

In Nov 2017, I started with a General license KC3KHH. After getting my Extra a month later, I received a vanity call of KA3LXM – my first call! I’m also an ARRL VE working out of my local club in Ft. Washington, MD – FWARC. I have an end-fed-half-wave antenna in the backyard powered by an IC-7300, IC-756Pro-II or USRP-1, love to tinker with hardware and software, and GNURadio is one of my favorite toys!

CW still holds my focus. From my early days of sitting in an uncomfortable chair, cans on my head, pounding keys on a mill, to relaxing with an adult libation trying to head-copy a station going slow enough for me – CW remains fascinating! CWops is a large, active group of like-minded individuals. Collectively they have demonstrated patience for the newbie and dedication to improving their own skills. I am very proud to be a member of this elite group!