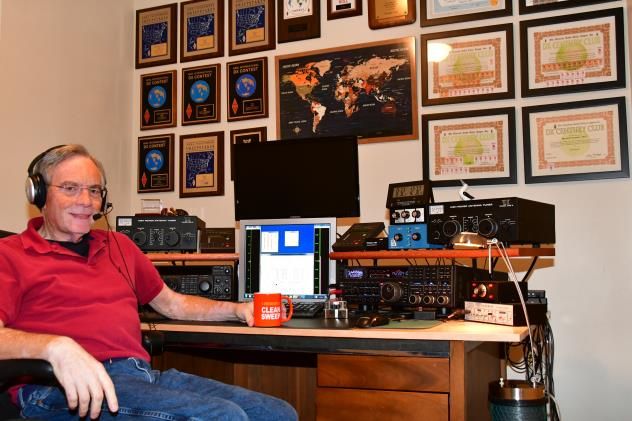 Ham radio runs in the family. My dad was licensed in 1916 – callsign 2NJ. Before ham radio he was a ship’s operator crossing both the Atlantic and the Pacific – mostly spark. He passed away when I was four – so the radio attraction got passed along via DNA, not direct contact. People don’t believe me when I tell them my father was born in 1897, but it’s true. A lot of time has passed. I have some of his logs and they are fascinating. He was copying NSS (East Coast) while on board ship in the Pacific, on, 28,200 meters!!

I became a novice at age 12 – 1961. W2DLT (still active), K2YCB (sk) and W2NPT (sk) were my Elmers. I had a good team to help me along. The novice license required one to start on CW and it’s a shame it’s no longer that way (an editorial comment). CW became a first love. That hasn’t changed in 58 years on the air. I can talk with my fingers – cool!

My ham career followed a typical progression. From Novice to General to Amateur Extra within a year. 25 WPM seemed difficult at the time – in my advanced years twice that seems easy. W1AW code practice sessions were my main teaching tool. On-air periods were up and down. 1966-1970 were spent in college and QRT except for the summers. 1986-1987 saw me back in college and QRT again. Operating was minimal as kids arrived and a living needed to be earned. I retired in 2003 at age 55, and ham radio was again front-and-center.

Ham radio shaped my education (that first degree was a BSEE), my career and I found Kathy, my wife of 48 years, via the hobby as well. I have no regrets about my hobby (actually, an avocation).

Rigs have come and gone – I still home brew a lot both in the shack and out in the antenna patch. Currently deed restricted, the antennas are all “wires in the woods.” They change every few years. I’ve published antenna articles and operating articles in QST and have had numerous articles published in NCJ. I am also a contributor to the ARRL Handbook and the ARRL Antenna Book. I’m active in the SEDXA and the SECC. Contesting and DXing are “my thing.” I also give lots of presentations. I’ve spoken at Dayton and at many hamfests and club meetings.

In 2010 I completed building “Blue Lightning,” a replica 1910 synchronous rotary gap spark transmitter. It runs a half kilowatt and makes all the noise and ozone the first ones did 100 years ago. Disrespected, it can be lethal (part of the “fun”). I’m one of the only ops around who knows how to tune up a spark transmitter and that knowledge has been put to use. For the 100th anniversary of the ARRL, “Old Betsy” was restored at ARRL HQ. I was in close contact with W1AW station manager Joe Carcia, NJ1Q – advising how to get that famous rig put back together, tuned and made safe for all the expected visitors (that part was not easy). If you are near Atlanta, come visit N4GG and you can send on an authentic spark rig (into a dummy load!).

The spark bug got me interested in the history of early wireless. Some of my presentations have been about our history, particularly from Marconi spanning the Atlantic in 1901 through 1929 when spark was outlawed.

So, what’s next? More CW for sure. More DX, more contests, more DXpeditions (TI, HP, PJ2, PJ4, PJ6, VP2M so far), more writing, more presenting, more experimenting. The arctic flutter that comes with working deep Asians over the pole on a cold winter night still excites me – it stirs old engrams. It will do so no matter how many times I do it. Radio is magic, it really is. To his credit, Marconi always said he had no idea what made it work. I’ve had all the course work and nearly six decades doing it, but deep down I don’t know how it works either. You can close a key in Atlanta and someone in Europe can hear it – that is pure magic.