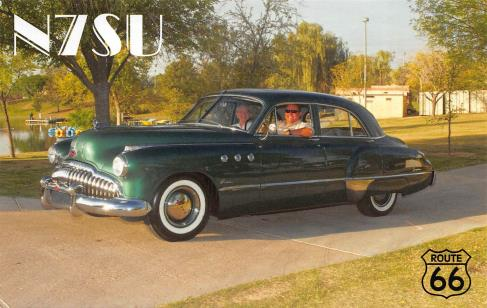 “Why don’t you go introduce yourself to the boy down the street who has the ham radio antenna?” With those words in the early fall of 1965, my mother set the stage. My Elmer, only a Novice himself, was two years older than me and I sat with him for hours on end as he made CW QSOs with his Knight T-60 and a Star Roamer receiver. He had a great fist and used a J-38. I modeled my own CW after his example. I received my Novice license in March 1966 (WN7FCV) and was able to climb the ladder to General class in November. My Novice station was a DX-40 and an SX-140.

In the 60’s, there was an amateur radio club at almost every high school. I remember the CW network of high school-aged hams that existed not only locally, but around the country. I recall how we all loved QSL cards and we spent many back-and-forth minutes on CW, painstakingly exchanging our mailing addresses for cards. Callbook was an expensive luxury for teenage hams. We even had a two-semester Electronics class that was part of the standard curriculum within our high school district. Where did that all go? (sigh)

After I received my General class license, like all Novices, I was eager to start using a microphone. I got a Johnson Ranger and also had a Johnson Valiant. Looking back on my logs from those days, I don’t see many A3 QSOs. Phone just didn’t turn out to be the big deal that I thought it would be. I stayed with my Novice roots in CW.

At the University I attended I had the great fortune to have another ham as a roommate. He had a Swan 350 and we broke many dormitory rules when we managed to hang a dipole antenna in the attic and poke a small hole in the ceiling for the coax. We had fun having a station in our dorm room and it was definitely a distraction to our studies.

Work, marriage and raising a family have all moderated my activity levels over the years but my lapses in activity have all had rebounds and I’ve managed to keep a station on the air from every QTH here in Phoenix. I find myself mostly interested in CW, QRP and CW contesting. I have a small collection of bugs, straight keys and paddles. I often ask myself the question of the ages – how many of these things do I really need?

The photo I’ve included doesn’t look related to amateur radio but it was all part of a plan that included amateur radio at its start. In planning for retirement, the XYL and I decided the first big adventure would be to restore an old car and use it to travel Route 66. I also planned to take a portable station along and make contacts from many locations along Route 66 as our journey progressed. We bought the ’49 Buick in 2005. We spent seven years completely restoring it to its factory original condition. The Route 66 trip happened in September and October 2017. We traveled Route 66 from Flagstaff, Arizona to Chicago then turned around and went west to Santa Monica, finally returning to Flagstaff. The plan for amateur radio evaporated though when a reality check showed there was not enough time in the day to do everything involved in traveling and sightseeing coupled wi

In retirement, I’ve found much enjoyment in returning to my roots, collecting and using all the rigs that I wanted as a youth but could not afford. I have now managed to accumulate too much and I have to resist every temptation to acquire anything else. I now finally own and use a complete Collins S-line. All the hams I knew in high school wanted to just see an S-line station in person but the closest we got were pictures in QST magazine or other printed advertisements. The teenage Novice in me still does cartwheels when I look at it in my station.

My fondness for nostalgia has led me to inherit the leadership of an annual Novice Rig Roundup event. This contest-like event happens over a one week period at the first of March each year. There is about 2000 who actively participate in a group devoted to collecting and using rigs from the Novice era and about 200 that actually get on the air and participate in the event, which is CW-only. If I have piqued your curiosity, please visit www.novicerigroundup.org or contact me for details about the groups that have formed on Facebook and Yahoo.

My greatest achievement in life is my three children, two sons and a daughter. My oldest son has followed me into amateur radio (KD7PMS). When he was very young, I set up a Hallicrafters SX-110 next to his bed and he would SWL at night after lights out. He told me that his interest in ham radio began with that SX-110 and the pleasure it provided him in the listening experience.

I express my sincerest thanks to Hank, W6SX, for his sponsorship of my CWops membership and to those who supported my nomination. CWops is truly a pinnacle moment in my amateur radio adventure.

th station setup and QSO time. We were on the road for 38 days.